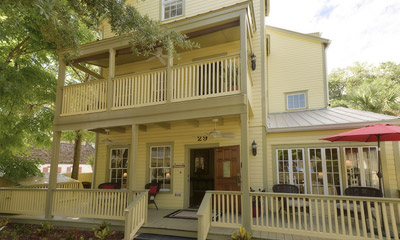 Searching through our news archives I stumbled upon this cute little article dated 2009 written by someone named Herb Hiller (must give credit where its due) and thought it was cute yet pretty informative when it comes to some of what St Augustine, Florida has to offer. I Decided to do a re-post with some minor tweaks and came up with the following information with humor for those visiting us for the first time. This just about sums us up in one piece here.

One of St. Augustine’s Bed and Breakfast Inns Pictured Above- Yes! Its the Agustin!

For those of you who have been wondering, St. Augustine is more than just history! Why, it’s quirky, romantic, engrossing and it’s (gasp!) e-d-u-c-a-t-i-o-n-a-l!

What are all those “oldest” places you ask… Surely you’ve heard by now about the “oldest schoolhouse“, the “oldest house“, the “oldest jail“. Everything seems to start with “oldest” doesn’t it? That leads into the following explanations. Read on…
At The Oldest House (enshrined as a National Historic Landmark dating from the early 1600s), walls are made of tabby, a mixture of lime, shell and sand once common in coastal Florida. A mulberry tree that grows in the yard descends from stock of the 1830s when silk culture, though boomed, never really caught on.

The Authentic Old Jail built in 1891  reveals rigors of incarceration during a time of heavy manacles and ball-and-chains. The Old Jail was actually constructed by the same people who built Alcatraz Prison. When the jail was closed in 1953, it immediately became a tourist attraction and said to be seriously haunted by ex-prisoners. This is the site of a popular ghost tour that books every single night. Visitors are just dying to see what’s inside or learn about who might have died at the Old Jail (no pun intended there).

Ancient, too, without benefit of the “O” word are the Mission of Nombre de Dios (from the founding of St. Augustine in 1565) and – fearsome fort and prison – the Castillo de San Marcos(1695). Less fearsome just north of the city is the site of America’s first free black community, formed in 1738. The is now a state park – Fort Mose.

Ambiance scintillates at the walled block of houses at the Dow Museum of Historic Houses (now closed) where celebrity visitors, hosted for 150 years, commenced in 1790 with Napoleon’s nephew Prince Murat and continued with Ralph Waldo Emerson and actress Greta Garbo.

Even shopping celebrates history at antiquarian bookstores, antique shops and art galleries, many in historic buildings. Most of these can be found on famous St. George Street’s pedestrian mall or credit card alley some have named it.

Kids adore Ponce De Leon’s Fountain of Youth  and, big-eyed, emit huffs of awe at the sight of huge gators at The Alligator Farm and Zoological Park.

Whatever your mood or taste in sights is, St. Augustine has something to offer everyone!