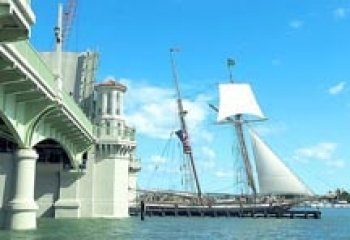 By JUSTINE GRIFFIN as printed in the St Augustine Record
The tall, white sails and 1812-era American flag of the naval schooner tall ship Lynx were visible to locals and tourists alike from the seawall of downtown St. Augustine to the sands of Vilano Beach.

The replica schooner from the War of 1812 era made its debut in St. Augustine waters midday Thursday, escorted by police and fire rescue ships and local boat owners wanting to get a closer look at the 122-foot high, 114-ton vessel. Cannons fired across the choppy waters of the Matanzas Bay as the ship and its crew passed through the Bridge of Lions and onward to the St. Augustine Municipal Marina — where the ship will call home for the next five months.

The privateer Lynx is a man-made replica naval schooner and serves as a living history program through the Lynx Educational Foundation. The schooner will stay in St. Augustine until February as part of an East Coast tour in celebration of the 200th anniversary of the War of 1812 and "The Star Spangled Banner."

Yvonne McCaw and Rosemary Stasch left their St. Augustine homes by 11 a.m. Thursday to give themselves enough time to find a good place to watch the ship come through the bay. They settled with nearly a dozen others on the newly constructed wooden deck in between the seawall in downtown St. Augustine and the Bridge of Lions. There they watched the ship sail through the draw of the Bridge of Lions.

"It’s a gorgeous day and a gorgeous boat," McCaw said. "It’s not everyday you see a boat this fancy."

Lynx Captain LeeAnne Gordon and her crew of seven will be hosting educational dockside tours of the ship during their five-month tour of St. Augustine. Crew members wear period dress and the ship flies flags from the 1812 era.

"It’s great to hear that the captain is a woman, too," said Stasch. "That’s one for our team."

The crew traveled to St. Augustine from Charleston on Thursday. The ship recently arrived on the east coast after completing the 2010 Great Lakes United Tall Ships Challenge Series in Hawaii and California.

The ship could be seen from the Vilano Beach shores from as early as noon Thursday. One couple having lunch at an otherwise deserted Vilano Beach boat ramp could see the tall white sails whipping in the wind as the ship made its entrance into the inlet.

Children and adults are invited to attend a dockside tour or educational sailing adventure program hosted by the crew while the Lynx remains in the St. Augustine Municipal Marina. Those interested can learn how to hoist the sails, steer the ship, fire the man battery of 6-pounder carronades and experience life aboard a schooner.

* It is an interpretation of a privateer or naval schooner from the War of 1812, the war that led way to America’s "Era of Good Feeling" and gave the country its national anthem.

* The ship features flags and pennants from the 1812 era, a crew dressed in period costumes and operating the ship as sailors would in the 19th century, and six carronades, which are short, cast-iron cannons.

* The new Lynx, built in 2001, is a square tops’l schooner classed as "sharp-built" schooners based on the Baltimore pilot vessels of the early 19th century. They are known for their inherent speed, sea-worthiness, and ease of handling.

* The Lynx Educational Foundation is a non-profit, non-partisan, educational organization, dedicated to hands-on educational programs that teach the history of America’s struggle to preserve its independence, according to its website.

* For more information, go to www.privateerlynx.org.

The history behind the vessel

* Lynx is an interpretation of an actual privateer named Lynx built by Thomas Kemp in 1812 in Fell’s Point, Md. The original Lynx was among the first ships to defend American freedom by evading the British naval fleet then blockading American ports and serving in the important privateering efforts.

* At the outbreak of the War of 1812, the American Navy consisted of only 17 ships – eight frigates, two brigs, and seven assorted smaller vessels including a few schooners that saw service in the Barbary Wars, according to its website.

* As early as the navies of the world engaged in combat, privateers crossed oceans in search of prey. This practice became widely accepted during the 17th, 18th, and early 19th centuries. These were not "pirate" ships, but armed and sanctioned vessels authorized to attack the enemy ships of whichever country their own nation fought. They were owned and operated by civilian — private — individuals, hence, "privateer."

* When a nation went to war, owners of private vessels were granted special permissions, called "letters of marque," to prey upon the enemy’s shipping, thus they were called "privateers." While rarely engaging enemy warships, their impact was felt by English merchants who insisted on warship escorts for their vessels. To perform this duty, warships were drawn away from engaging the scant American Navy and blockading our coast, and thus did the privateers.